Aythya valisineria, North America's largest diving duck, is noted for its exceptional physical abilities and the striking colouration of the drake (male) of the species. This amazing diver feeds primarily in shallow waters, but can dive more than 9 metres when necessary. It is also an incredibly fast flyer; it has been tracked flying at more than 100 kilometres per hour.

Weighing about one kilogram, the canvasback stands approximately 50 centimetres tall and has a wing span of about 85 centimetres. It has a round, stout body and webbed feet. The male bears stunning dark red plumage on its head, a black breast, rump and tail, and canvas-white feathers on its back, wings, and belly - from which the species gets its name. It also has an elegantly sloped forehead and a relatively long black bill. The mal's eyes are bright red. The female's brown and white body and darker red-brown head camouflage her among the marsh vegetation where she makes her nest.

The canvasback spends its summers in breeding grounds on the lakes, ponds, prairie potholes and rivers of western North America, from central Alaska and most of Yukon and the western Northwest Territories through much of Alberta, southern Saskatchewan, and south and western Manitoba and into the north central United States. Unlike most ducks, it does not build its nest on land; instead, it lays its eggs in a floating nest fashioned from marsh vegetation and lined with down. In late autumn, it migrates south and spends its winters on the Pacific coast of the United States, across the south-central United States, along the eastern Atlantic coast, the Gulf coast (especially Louisiana), and across much of northern Mexico.

Designed by Canadian artist Glen C. Scrimshaw, your coin features a coloured and engraved male and female canvasback in their natural habitat. Standing at the right front side of the image, the male is presented in profile from its left. The stance highlights the drake's characteristically sloped bill, graceful neck, and distinctive colouring. The male stands on a floating nest filled with eight small eggs. The female paddles in the water on the left side of the image, slightly behind the male. Her pose showcases the swimming posture of the canvasback as well as the female's mottled brown colouring. The background presents a beautifully coloured sunrise scene on a misty tree-lined lake. -

See more at The Canadian Mint 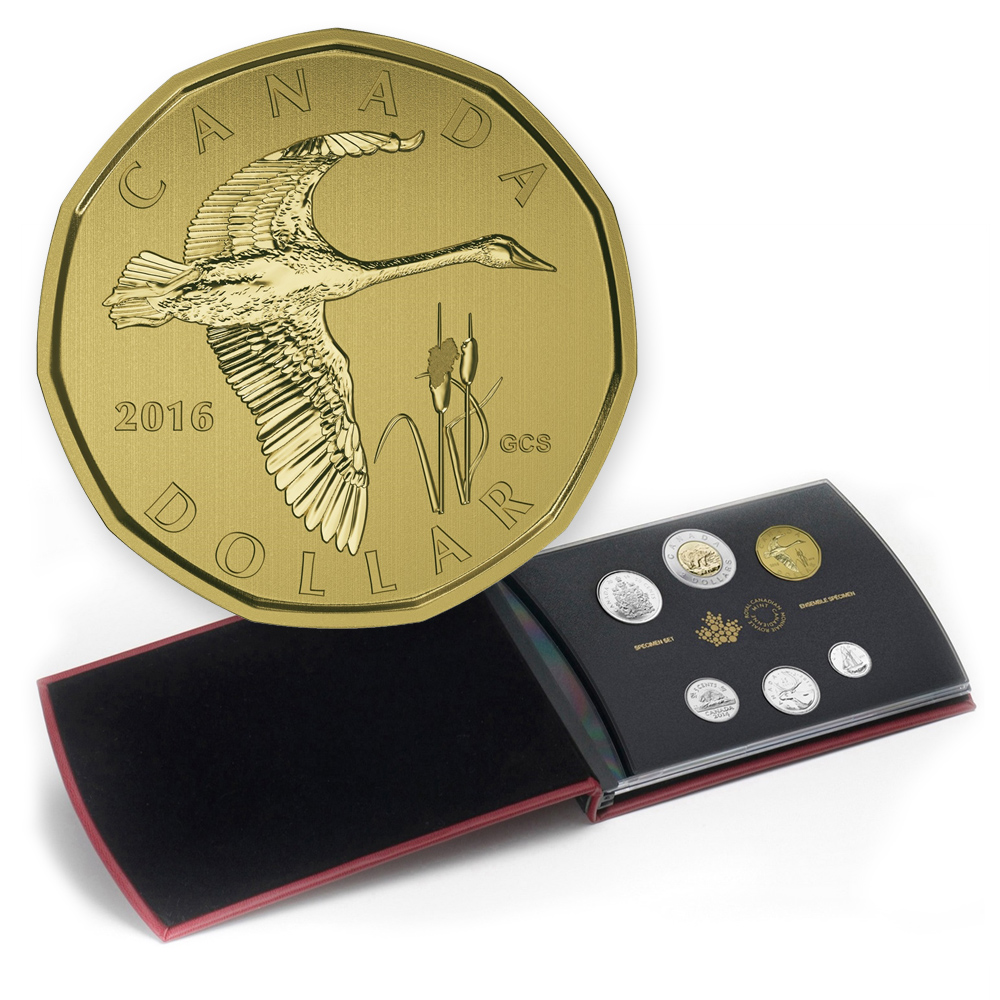 The one-dollar coin in the 2016 specimen set of Canadian coins features a reverse image by Canadian artist Glen Scrimshaw. Beautifully depicted in its natural setting, the tundra swan is particularly resplendent with features that are brought to life through finely detailed engraving and the unique combination of finishes. As with all Canadian "loonies," this coin features an 11-sided shape and raised edging.

See more at The Canadian Mint