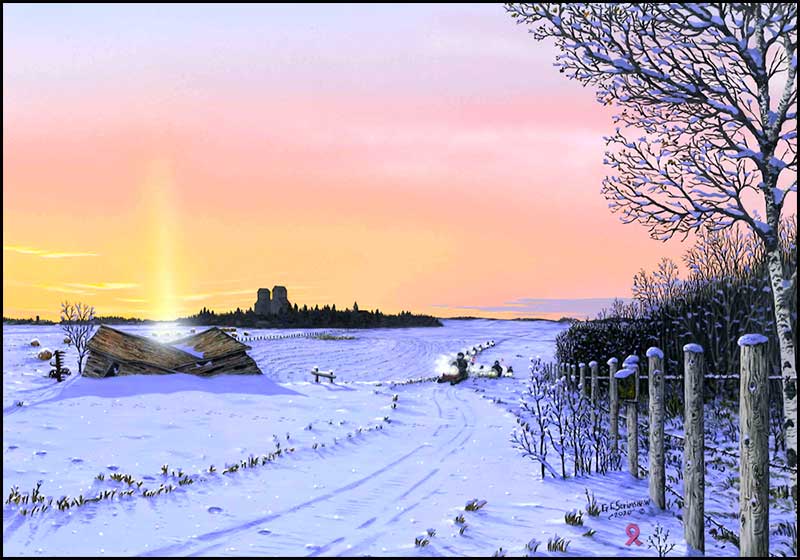 "Mission of Hope" is in celebration of the 20th anniversary of Prairie Women on Snowmobiles annual ride in 2020. All funds raised by their ride goes directly to Breast Cancer Research.

A portion of the sales of each print in this series sold goes directly to PWOS to help their cause.

These brave women have their ride in early February which is typically one of the coldest months of the winter. They start out in the dark and stop in many communities each day then end their ride for the day in the dark! No matter what the temperature is, they are out on their snowmobiles Riding for The Cure, visiting communities and raising much needed funds for Breast Cancer Research.

Over the past 20 years there has been 164 riders (10 each year-some repeat riders), 25 executive, 37 pit crew and they have visited 198 communities. They have also raised 2.6 million dollars to date for breast cancer research as well as $367,000 for the purchase of equipment for Saskatchewan cancer clinics. (Nearly 3 million dollars in total) The have also travelled over 33,000 kilometres over the past 20 years.

A special thanks to Hazel C for the name suggestion of "Mission of Hope"!

"Mission of Hope" is 2nd in a 3 part series. Glen will be creating a moonlight scene of southern Saskatchewan to celebrate PWOS's 25th anniversary in 2025. It will be the same size/format as Mission of Hope to complete the 3 prints series. Please contact us if you have any questions!